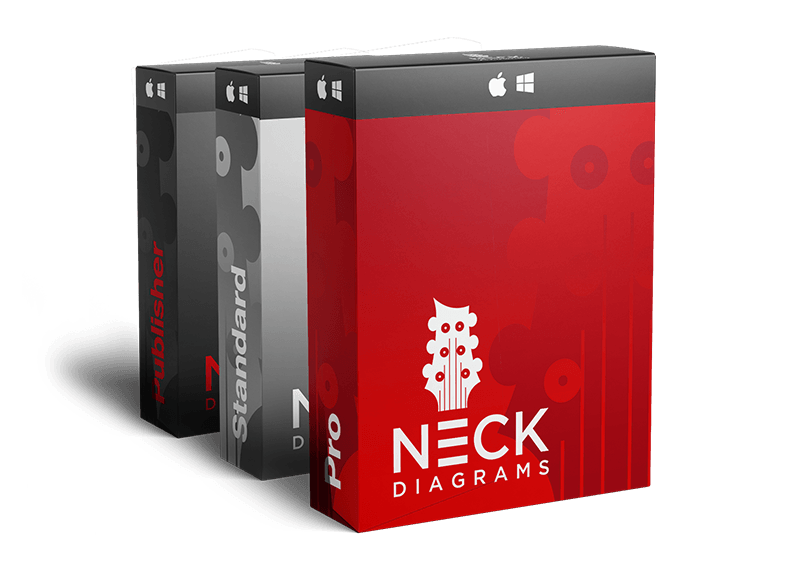 As an example, let’s say you want to study the Dorian scale. This is the second mode of the major scale – it happens to be the “sweetest” sounding of the minor modes as it contains a major 6th.

If you’re not familiar with modes a common way of explaining them is that they are simply scales built starting from each degree of a parent scale, in this case the major scale, or the first mode (Ionian). This isn’t necessarily that helpful as most folks will think “great, but it’s the same notes, so what?!”.

Well this is true, but the important thing is that when played over the corresponding chord you will hear a change in tonality. So as Dorian is the 2nd mode, playing a G major scale starting from the 2nd degree A up to the A an octave up will be a one octave A Dorian scale. Playing this over an Am7 chord will highlight the sound of the scale.

So let’s fire up Neck Diagrams and create ourselves a fretboard diagram of the A Dorian scale:

Now we can see the intervals! Note that the important intervals are the minor 3rd, giving the minor flavour, and the major 6th which gives the scale its Dorian characteristic by distinguishing it from the natural minor scale (Aeolian) which differs from the Dorian mode by having a flat 6th. Notice also how the Dorian scale simply adds two more notes to each octave of the pentatonic minor scale:

See how all the other notes not highlighted in blue make up the first position minor pentatonic?

You could now create yourself a page with all 5 CAGED positions and learn them all… That might be a bit daunting, so let’s break it up into learning two shapes at a time.

Here’s the position 5 CAGED shape, but this time in C:

You were probably expecting A Dorian position 2, so why did we go the other way? Well, if you look at where the notes are you’ll see they’re in the same area of the fretboard. This means that if we’re playing over an Am7-Cm7 chord progression we won’t have to jump about the neck – we can stay exactly where we are.

If you know the major scale then you’ll probably have noticed that the above scale shape is the same as the the first position major scale! The diagram shows how it is that when you start from the second degree you no longer have a major 3rd or a major seventh interval but that they become minor 3rd and minor 7th in Dorian.

Learned it? Now use it – improvise!

Once you’ve got these scales under your fingers you should create yourself a simple backing tracking to jam over – Band In A Box is fantastic for this kind of thing – it won’t help you produce tracks you’d want to release commercially but for practicing over it’s unbeatable!
If you’re a Mac user you could use GarageBand which comes with your computer. Create 8 bars of Am7 followed by 8 bars of Cm7 and loop it.

If you found this useful and would like to take the Dorian mode further, then head over to the continuation of this lesson in the blog, here.